So after you take that personality test, you might want to take a long hard look at the personality traits you don’t possess – the type that is so not you – your polar opposite. Chances are that’s the personality of your hero because as we all know opposites attract.


You may think, ‘that’s crazy!’ No, that’s God’s plan – it’s not so much that opposites attract as that they complement one another. Isn’t that what we want in a hero -- someone who completes us?


As I’m developing a romance couple, I look at personality charts and endow them with characteristics guaranteed to create fireworks. For instance, a warm, carefree social worker would utterly frustrate a hard-nosed, regimented businessman.


But once they resolve their difference, they can actually complement one another. His practicality can relieve her fears and insecurities freeing her to pursue her interests while her compassion can temper his insensitivity allowing him to be a better leader. 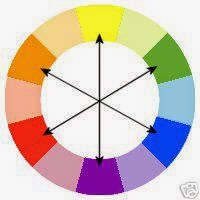 Another example is the color wheel. Hues located on opposite sides of the wheel complement one another which is why we like orange and blue, well, if you’re a Florida Gator fan. The contrast makes each color appear brighter together than alone. When decorating a room we use a complementary color for accents that create energy and vibrancy.
Now we can use analogous colors, those that are next to one another on the color wheel, for a more calm and relaxing atmosphere. Cool shades of blue and green may be fine for a guest room, lulling visitors to sleep.


There’s something to be said for comfort and familiarity in a relationship. And that comes, even with opposites – a balance develops, a routine where we fill in the gaps in each other’s lives.


Do the differences in your relationship bring harmony or ignite fireworks?
Posted by Dalyn Woods at 5:00 AM No comments:

Dalyn Woods
Dalyn Woods weaves romance and faith into contemporary suspense. She is blogging her current work in progress - Finding Your Hero, Being His.